A Chiropractor broke my shoulder, and then another one fixed it 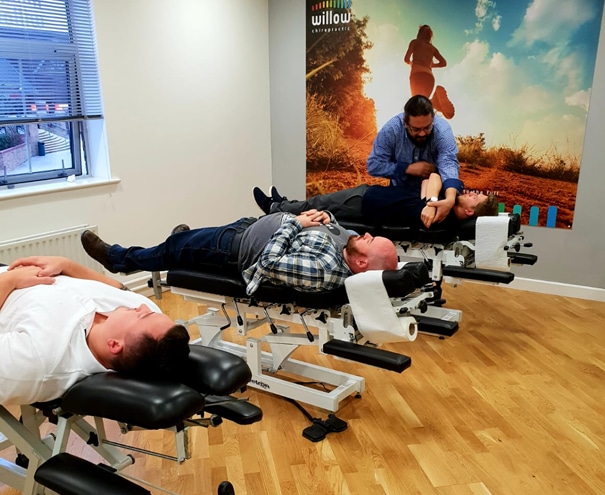 March 1985. I stepped up to the mat and across from me was Ron Tripp. I knew he was the US and Pan-American, under 95kg judo champion. He had been on the US team for many years, and we were in his hometown: Tulsa, Oklahoma.

The referee called us to the centre of the mat, we bowed in. The referee said “Hajime!” and the fight was on. Ron’s crowd cheered him raucously, but they were shocked into silence when this young, unknown upstart threw their hometown hero in our first grapple. A small score, but hey, I was on the board.

Bad move. This just made him angry. On the very next move he picked me up and slammed me on my head. I turned my head and fell on my neck and shoulder. I felt my shoulder explode.

The next day when I was back in Dallas, I got my shoulder X-Rayed and the doctor told me, “It’s broken.” I knew that.

Five-hour drive back to Dallas. Next day got my shoulder X-Rayed. Doctor said: “It’s broken.” I knew that.

“Wear this sling and don’t move your arm for the next 6 weeks, then come back for an X-Ray.”

Six weeks later the doctor tells me that the bone has fused well – the fracture is healed.

“But I can’t move my arm, and can’t sleep because of the pain…what do I do?”

The doctor sent me to get manual therapy on my shoulder and prescribed pain killers.

Six months later, the pain was unbearable, and I still couldn’t move my arm. I couldn’t work, I couldn’t exercise, and I had fallen into a depression.

My girlfriend said: “Why don’t you go see my Chiropractor?”

“They crack your back and you feel better.”

I thought: “What a load of rubbish.”

When I got to his office, he explained to me that he had only agreed to see me as a favour to my girlfriend, but that he was moving away next week and could only do “emergency” treatment with me for the next couple of days. He explained something about the spine, the brain, the spinal cord, but I didn’t really understand what he was talking about. He then did some pushing and pulling, and told me “We’re done, come back on Thursday.”

I was right. This was rubbish.

I got home, and my girlfriend asked me how it went. I was polite and didn’t want to dampen her enthusiasm, and so told her it went great.

“Come back on Thursday.”

And so in the interest of greater peace, even though I thought it was ridiculous, there I was back on Thursday.

He touched my back again, he touched my neck, and then he adjusted my neck. It was like someone reconnected a plug into a socket. I could move my arm, it even felt better. I didn’t understand what had happened or why, but I did know that without even touching my shoulder, my shoulder was working again after six months of feeling useless.

He moved away the next weekend. He found me another Chiropractor to take over my care, and then later, when my wife was pregnant with our daughter and couldn’t walk due to sciatica, that other Chiropractor got her healthy as well. This inspired me to change careers, but that’s another story.

What I didn’t know at the time was that the judoka who broke my shoulder is a Chiropractor. Dr. Ron Tripp. The one who “fixed” my shoulder was Dr. Mark Langas. I am deeply grateful to both.

Find out if chiropractic can help you by booking a consultation with one of our expert Chiropractors today.