Willow Volunteers In India: A Story Of Gratitude 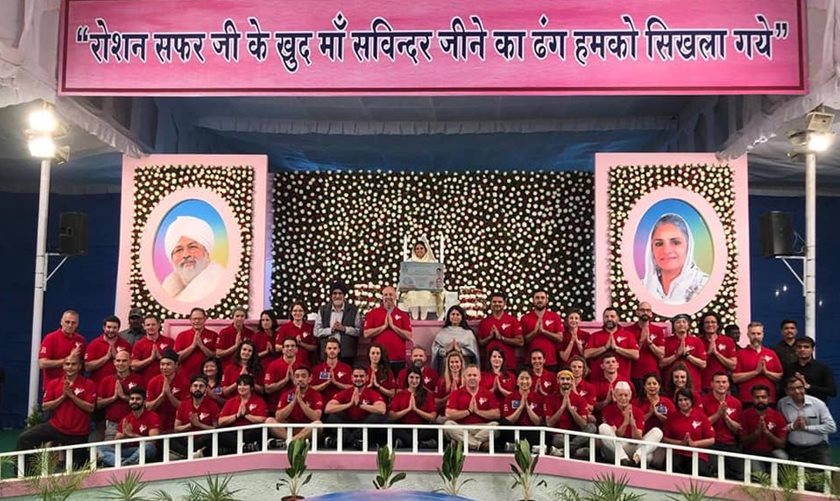 Picture a place which is characterised by love, respect, and morals; where all kinds of healthcare is freely accessible to all who need it; a place where people arrive and are fed for free. Picture a crowd of 1.5 million people operating on pure energy and love, which requires no security to control it and no clean-up team to pick up after them. Sounds too good to be true, right? Wrong. For a total of six days a year—three in Delhi and three in Mumbai—this place exists, and it goes by the name of the Nirankari Sant Samagam. This year two of Willow’s chiropractors and Partners, Sarah Barrow and Liam Rice, attended the 52nd Samagam on 25th-28th January as volunteers. Sarah was kind enough to sit down and talk to me about her experience there.

“The sheer energy at the site was absolutely indescribable”, she told me. “People come from all over the country in the back of trucks and packed onto trains, they travel for miles and miles just to come to this event because it holds such significance for them.” The Sant Nirankari Mission is a universal brotherhood of ideals around humanity, philosophy, love and respect which originated in India, but has since spread worldwide. It is headed by spiritual leader Satguru Mata Ji, who leads the Nirankari Sant Samagam events. In her opening address at the beginning of the three days, she taught that “we should live like flowers of different colours which make a beautiful garland when united together”, and that spirit pervades throughout the Samagam. “The whole event is so tangibly characterised by these values—you can see it in everybody who is there, in everything that they do. It’s so clean, there’s no litter or mess, and not even any security required for this enormous amount of people. Each person working the event is a volunteer, right from the guides to the translators to the cooks and the washing up staff. Many of them take time off from their paid day jobs to come and do it—one of my translators, Amit, had saved up for six months so that he could come and work here again, and that’s not an unusual case by any means. The passion is just phenomenal.”

A significant element of the event is the free healthcare on offer. Sarah and Liam were there with 60 other chiropractors, most of them from Life West in the USA. “The chiropractic tent stood alongside lots of other healthcare-providing tents; physiotherapy, a maternity tent, even a pop-up ICU! At the Delhi event they also even have a mobile operating theatre. It’s incredible. All healthcare is paid-for and expensive in India, so for the majority of the attendees this is the only opportunity they will have all year to access these services.”

The queue for the chiropractic tent was so long that the wait time was between 4-5 hours; over the course of three days, the team of chiropractors saw over 9000 patients. They performed adjustments on any subluxations found within the spinal joints, releasing the body’s potential for healing. This was prefaced with a short, educational health talk from Lynn McAvenia of ChiroEurope. I asked Sarah if anything surprised her about their reception in Mumbai, to which she answered, without hesitation, “the sheer gratitude of the people we were able to serve. How far they travel, how long they are willing to wait for an adjustment, and how thankful they are for it. They place such value in it, they must see and feel the benefit of it in such a way that makes them hold their adjustments with deep reverence. People with hardly any mobility at all were getting down on the floor to kiss their chiropractors’ feet in thanks.” Similarly, Liam was touched by how “the people we were adjusting and the volunteers were just so happy and grateful”.

In addition to the crowd of 1.5 million attendees, around 10 million people watch Satguru Mata Ji’s televised evening addresses from their homes during the Samagam. These addresses are usually dedicated to teaching wisdom and values, but on the closing address of the 52nd Samagam Satguru Mata Ji made a special tribute to the chiropractic team and gave deep thanks for their work, even inviting them on stage for a photograph. No other healthcare profession represented at the event was granted the same honour, so this was a particularly significant gesture of gratitude and endorsement from both her and from the Mission as a whole – it even made it into the press release account from that evening. One of the people that Sarah worked alongside was a German ex-orthopaedic surgeon who had retrained as a chiropractor. She had attended the Samagam volunteering in the chiropractic tent for a few years already and had incredible stories to tell about the difference that the adjustments she performed there had made to patients’ mobility. Some even returned to her year on year, and the progress she saw them make was astounding to her.

“My perception of my profession has totally shifted. I never truly appreciated the true, pure power of an adjustment, and of the human body in its ability to heal. I’ve also never been so sharply and intensely focused and present during my adjustments before. It’s so tempting to try to fill up time with polite waffle, but that also distracts from the actual task at hand, which is healing. The energy at the Samagam was so open, embracing and gracious, and buzzing with positivity, it really created an atmosphere which promoted healing; this is something I was never fully convinced on before, but now that I’ve witnessed it first-hand I totally get how it can transform the adjustments that we deliver and promote the effects that we are having as chiropractors on our patients.” Liam Rice agreed: “working in an atmosphere like that with other chiros was really special and helped with the healing process physically and mentally for everyone involved.”

“I was uncharacteristically nervous before going on the trip”, Sarah admitted, “until I remembered something Matt Allen had said to me before—it’s not about me. It’s about the patients. That’s a mindset I need to really reinforce with myself, and carry back into clinic with me here in Bristol.”

“I finally know exactly how I want to practice” she told me, beaming.